Notes and notations on the slashed chord

c) With the next song entitled “Na Tchatcha”, it is getting a little bit unconventional. Remember that Natif is based on the movements and intervals of the “vaksin.” In some rhythmic patterns where they are strong and prevalent, how are we going to emphasize the notes that reproduce them especially when they represent low frequencies or bass notes? The reason I’m asking this is because conventionally one can only have one note on a “Slashed chord.” We have decided to have more than one note on the “Slashed chord” so we can mention and emphasize the notes played by the “vaksin” in this specific chord.

Notes and Notations on the Slashed Chord

We may need to indicate the movement of the vaksin on the Slashed Chord. This movement can be ascending or descending or mixed—ascending and descending at the same time. We are introducing 3 indicators: < ↑ ↓ to complete those possibilities.

For an ascending movement, no indicator is needed: Am/C,D,E 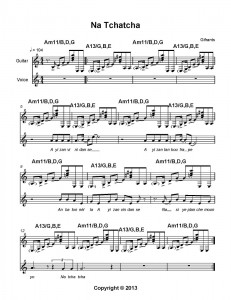