Fooling around with the “sus4”

While the ♯9 commonly used with a major key opens a small window to improvise on a minor scale, the “sus4” seems to reinforce both the major and minor keys. Maybe, this is why I feel such an affiliation to it. The melody determines the major or minor key, but the use of “sus4,” while it is not making the tonality of the melody irrelevant, reinforces it without any emphasis. I also believe that the “sus4” brings a mysterious and ethereal flavor to the progressions used in the “natif’ concept, consequently in Haitian music.

The analysis of the chords of the song below entitled “Si w Te La”, becomes much easier when one includes the tuplet of the last beat of the precedent measure. The “sus4” must not be seen as the 1st since the first 3 notes A-G-F of the melody suggest clearly either the F major key or its minor vi chord which, in this case, is the key of that melody.

The “natif” concept evolves around the movement and intervals of the “vaksin.” The consistency of the “A” and “E” notes on the bass is a strong reminder of that. As one can see, the “A” remains the 5th for the Dmi9 and the “E” is the 9th. But, the former becomes the 6th or 13th for the C9 and the latter the 3rd.

But, it will be good to note that the B♭6 is the only chord immune from the “sus4.” 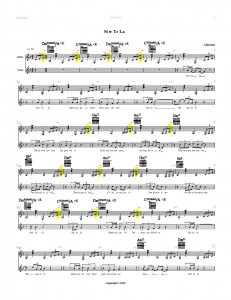 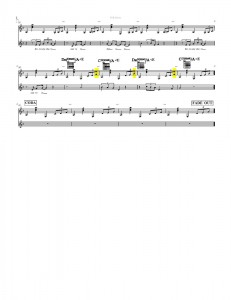