Chordal approach to the “vaksin”

a) One of the major characteristics in the use of the vaksin lays in the fact that it is being played independently of the tonality of the singer. Consequently, one must expect that some rhythmic patterns reflect such an occurrence by using what I call a “chordal grouping”—a set of chords played within one bar at least in order to create a rhythmic pattern.

Here is one example: 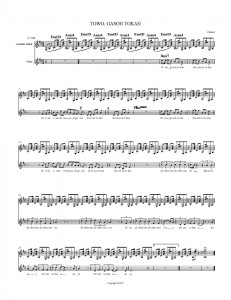 As one can see, the melody is being played on Bmi flavored with a D major pentatonic. We have also shown above the substitutions made possible by the “natif” concept for I, IV, VII, vm chords in this song.

Similar rhythmic patterns can be seen as musical formulas which one can apply to some melodic developments. This approach remains more intuitive than cognitive. The Blacks did not write down the complexity of the polyrhythmic aspect of their music. It has been passed on based on that collective intuition that is fueling traditions. The use of western instruments while basic concepts of harmony must be followed should embrace that collective intuition. Our sensibility is more acute, we have more to convey in much broader and specific ways.